Muslims Declare That They Must Cannibalize Human Flesh For Allah, They Take An Innocent Man, Carve His Heart Out And Eat It In Islamic Ritual

Muslims in Iraq declared that they needed to eat the flesh of a human being for Allah. They took an innocent man, carved his heart out and ate it. One of the people present was so disgusted that he vomited.

The barbarity that just came out today is unreal. This is the Shiite peaceful rebels, planning to enter Mosul, Iraq, whom President Obama and Hillary Clinton are supporting. One chants a fragmented prayer repeating “Allah wills it, Allah provides” while another says “barek, barek” (first bless it, bless it), as if it was a sacrificial lamb.

As the Shia Muslim savages are opening the heart of this Sunni Muslim, Mayan style, to only find out what Allah provided they eat was the man’s heart, and right in front of the camera. They then continue to pull out the liver and whatever else from the chest cavity while you can hear a sound of someone throwing up in disgust. One man tells them repeating “A’fieyh” “A’fieyh “bone appetite, as another man takes a napkin and wipes off the blood from the mouth of the cannibal who just took a large bite out of the heart:

Am I dreaming as I write this? Or will I wake up to soon realize, I do live in a dream world of zombies becoming reality. Eating human flesh brings in demonic influence and even possession. 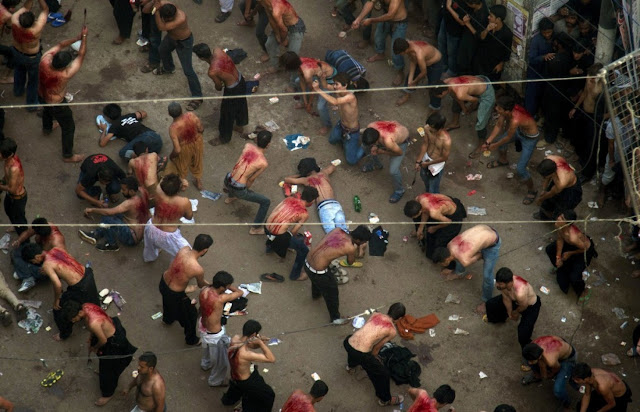 Pakistani Shiite Muslims flagellate themselves with knives during Ashura commemorations in