One argument is that if they paid more money they could get better help. Think about that. Pay them to act more like compassionate humans??

Two staff members have been fired and arrested and an Illinois nursing home now faces a lawsuit after video footage allegedly showed them taunting a 91-year-old dementia patient.

The suspects, arrested on misdemeanor charges, were identified as Brayan Cortez and Jamie Montesa, caretakers at the Abington of Glenview nursing home, about 24 miles north of Chicago.

Both employees “were immediately terminated,” the home’s administrators wrote in a statement.

But the patient’s family disputes that, claiming the pair remained on the job for another week because they were initially cleared of wrongdoing.

“They violate her safety, her privacy, and then they do a slow walk to correct the behavior?” the patient’s son, Tom Collins, asked Chicago’s WLS-TV.

According to reports, Snapchat video footage recorded last December – four days before Christmas -- showed Cortez waving a hospital gown at the elderly woman, knowing that the sight of the gowns was a source of fear and anxiety for her. Montesa allegedly held the camera. 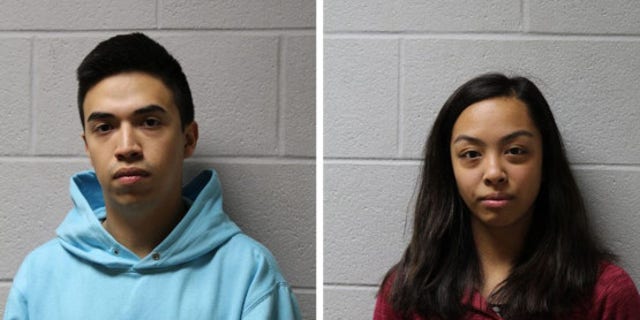 "You just can’t believe you’re seeing this," Joan Biebel, Collins' daughter, told Chicago's WGN-TV. "You think your mom is safe and now this is going on. You’re just trying to figure out what the heck is happening here."

"You just can’t believe you’re seeing this. You think your mom is safe and now this is going on. You’re just trying to figure out what the heck is happening here."

Cortez told police the taunting of the patient was considered an “ongoing inside joke,” the station reported.

“It’s abuse,” said Margate Battersby Black, an attorney representing the elderly woman. “They knew that she didn’t like this and they persisted in doing it.

“Not only did she not get the care she needed,” the lawyer said, “but she got bullied and taunted instead. They had two staff members who were in her room for the sole purpose of playing a sick game.”

The two nursing assistants are due in court later this month. The elderly woman has been moved to a different facility, WBBM reported.