ABC News anchor Amy Robach was caught on a hot mic claiming higher-ups at her network killed a story that would have exposed the now-deceased sex offender Jeffrey Epstein three years ago, but the Disney-owned news organization says it wasn't up to their standards.

“I’ve had the story for three years… we would not put it on the air,” Robach said on the hot mic. “It was unbelievable what we had, Clinton, we had everything.”

Project Veritas, whose controversial founder, James O'Keefe, describes himself as a “guerrilla journalist,” published the footage that included Robach saying ABC refused to air an interview she conducted with one of Epstein’s victims.

Robach quickly admitted the authenticity of the video, which has not been independently verified by Fox News, but dismissed the notion of unethical journalism.

“As a journalist, as the Epstein story continued to unfold last summer, I was caught in a private moment of frustration. I was upset that an important interview I had conducted with [Epstein accuser] Virginia Roberts didn’t air because we could not obtain sufficient corroborating evidence to meet ABC’s editorial standards about her allegations,” Robach said in a statement provided to Fox News. 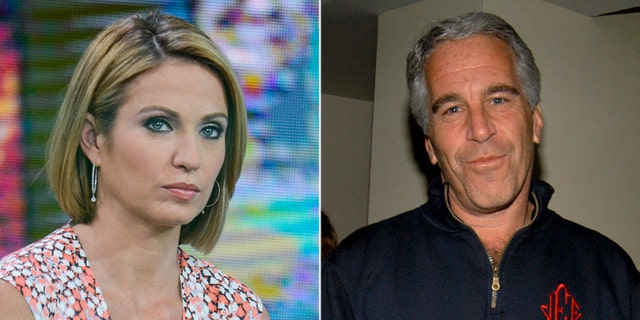 ABC News anchor Amy Robach admitted on hot mic footage published by the controversial Project Veritas that she had the Jeffrey Epstein story three years ago.

The hot mic outburst was published by Project Veritas, which said that the tape was leaked by an ABC News insider.

“We would not put it on the air. Um, first of all, I was told, who’s Jeffrey Epstein? No one knows who that is. This is a stupid story," Robach said on the video recording. "Then, the Palace found out that we had her whole allegations about Prince Andrew and threatened us a million different ways. We were so afraid we wouldn’t be able to interview Kate and Will that we, that also quashed the story.”

Robach also said that Roberts had photos and statements from attorneys to back up her claims.

“I tried for three years to get it on to no avail. And now it’s all coming out and it’s like these new revelations and I freaking had all of it,” Robach said. “I’m so ****ed right now.”

ABC News downplayed the significance of the video, telling Fox News that the Epstein story wasn’t fit to air. “At the time, not all of our reporting met our standards to air, but we have never stopped investigating the story. Ever since, we’ve had a team on this investigation and substantial resources dedicated to it," an ABC News spokesperson told Fox News. "That work has led to a two-hour documentary and 6-part podcast that will air in the new year.”

Robach was also heard saying, “There will come a day when we will realize Jeffrey Epstein was the most prolific pedophile this country has ever known. I had it all, three years ago.”

Robach's diatribe was allegedly recorded in late August, days after NPR criticized the mainstream media, including ABC, for sitting on Epstein news.

“My comments about Prince Andrew and her allegation that she had seen Bill Clinton on Epstein’s private island were in reference to what Virginia Roberts said in that interview in 2015,” Robach said.  “I was referencing her allegations -- not what ABC News had verified through our reporting. The interview itself, while I was disappointed it didn’t air, didn’t meet our standards. In the years since no one ever told me or the team to stop reporting on Jeffrey Epstein, and we have continued to aggressively pursue this important story.”

Epstein was found dead this past August in his Manhattan prison cell while awaiting trial on federal sex-trafficking charges.

Robach also said on the video that she “100 percent” thinks Epstein was actually murdered.

“He made his whole living blackmailing people. There was a lot of men in those planes, a lot of men who visited that island, lot of powerful men who came into that apartment,” she said. "I knew immediately."

Prosecutors alleged that the previously convicted sex offender paid girls as young as 14 hundreds of dollars for massages before he molested them in his homes in New York and Palm Beach, Fla., between 2002 and 2005.

Project Veritas, which frames itself as a conservative whistleblower watchdog group, has previously released what it claims to be hidden camera footage of network news producers, federal politicians, and members of private political organizations making statements while unaware they were being recorded.

"The Clinton Affair" first aired on A&E. It is unreal how Clinton wormed out of that mess, but of course he had the help of the media, the DNC, crooked lawyers, his villainous "wife", and whether you believe it or not, he was unknowingly helped by honest Republicans who were "had" by slick willy because they, wrongfully, thought he would be truthful. It is an eye opener and we can see how the Clintons have been protected all these years.
It's hard to take. He smirks, clowns, talks down to people because he knows he's getting away with it. I was surprised to see how big a part Lewinsky had in the cover up and how she too protected him. But he was leading her on, making her think they were going to end up together. It's pretty sickening.

It's not just about Monica lying. It is also about how all his misdeeds were covered up. Paula Jones subpoenaed Juanita Broderick because Jones knew about Clinton raping Broderick. A CBS reporter asked for and got an interview with her and Broderick told the story. The head of CBS asked the reporter what she thought and she said she believed Broderick. CBS killed the story because they didn't want Clinton hurt politically. Also, in this you will see Bill Clinton admit to his affair with Gennifer Flowers, an affair he had always denied and had asked her to lie about. He said the affair was only a year, while Flowers, friends, and family, all say it was a 12 year affair.

Will be interesting to see IF ABC does anything with her or if they will be hands-off and just eat this one?  You know it's a tough one for them to swallow though but just lets you know ABC is just like the others when it comes to their leanings and how they allow it to affect the news reporting.

Clintons aren't the only ones,, which is a reason it all has been covered up.

Jack HammerOld Faithful
Maybe not the best way to air a story but They got it out there as if it was
an accident. They know exactly when a mic is hot or not. After watching the
so called mistake the bad acting was a giveaway that it was intentional.
11/6/198:05 AM
❤️ 1

What I find interesting is that even the Network folks know that none of the traditional network people can be trusted so that's why they sought out Project Veritas to spill their goods.

The woman accused of being a whistleblower who allegedly leaked a video of ABC News reporter Amy Robach's hot-mic admission that the Disney-owned network killed a bombshell report about Jeffrey Epstein spoke publicly Friday for the first time.

The previously unidentified woman, 25-year-old Emmy-award winning producer Ashley Bianco, sat down with former Fox News and NBC News anchor Megyn Kelly Friday morning and revealed she had worked for CBS for only four days when the network fired her. She claimed CBS offered no explanation for the termination or the opportunity to defend herself. Spokespersons for ABC and CBS did not respond to FOX Business' requests for comment on Friday.

The woman that CBS fired says it wasn't her and Project Veritas said it wasn't her yet this woman still is out of a job.  No one in the media seems intent on protecting whistleblowers associated with the media.  Remember a young male whistleblower that was on his way to meet someone to spill the beans on the Democrats back in 2016 election?  He never made it to who he was supposed to meet as very early on morning, in Washington, he was found murdered.

Seems the ONLY whistleblower that liberals and the media Dare protect are the ones they have lined up, set up to report on Trump and/or Republicans.

You think you’re bored at home?
3 hours ago

Not your President?
6 hours ago
Blood From Covid-19 Survivors May Point the Way to a Cure
6 hours ago

James Woods shut down by Twitter, AGAIN, over widely-shared photo of naked democrat
1 day ago

The cat is out of the bag!
1 day ago
The Story of CornPop-LOL!
1 day ago

Americans need help. Democrats must stop blocking it.
2 days ago