Dr. Alveda King: President Trump is not a racist and cares about all Americans

Dr. Alveda King, who attended a White House meeting with President Trump and inner city pastors, weighs in on the Baltimore rift.

President Trump met with 20 African American faith leaders on Monday as he was coming under fire for his criticism of Rep. Elijah Cummings, D-Md., Baltimore and Al Sharpton.

Dr. Alveda King, the niece of Martin Luther King, Jr., who was among the faith leaders from the African American community that met with the president at the White House, called the meeting sincere and productive. 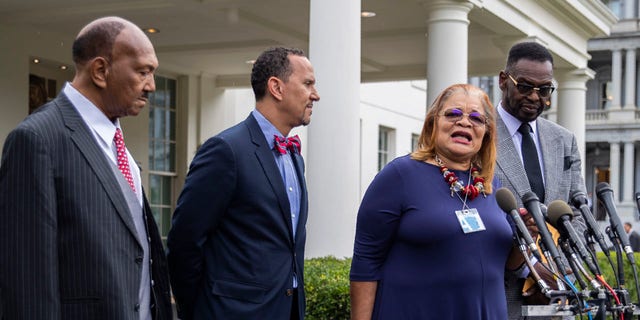 A feud between Trump and Cummings has sparked accusations of "racism" on both sides.

Trump responded to Cummings' criticism of condition at migrant detention facilities at the U.S.-Mexico border by calling the congressman's Baltimore district "a disgusting, rat and rodent-infested mess." Baltimore is "FAR WORSE and more dangerous."

Then Trump traded barbs with Sharpton, a Baptist minister and founder of the civil rights group National Action Network, in a Twitter war.

King told Trump she had photos of him with Sharpton and Rev. Jesse Jackson, the civil rights leader whose nonprofit Rainbow PUSH Coalition is based in Chicago, when they gave him awards.

"They began to hurl insults at the president. Nobody wants to understand that," King said. "What the president's simply saying is your communities need to be fixed and he said to Representative Cummings, Elijah Cummings, who actually said either abort the babies now or you'll kill them later. He says things like that and then you look at his community and you see individuals suffering, communities suffering, and families suffering."

I think I can take her word for it just like everyone else.   group hug..!!!

Critics and skeptics of President Trump were certainly not going to listen to him when he warned about the perilous state the city of Baltimore is in, but perhaps they'll listen to actual Baltimore police officers. On Monday, the Baltimore City Fraternal Order of Police publicized some somber statistics.

By any measure of systemic urban collapse, Baltimore is, as Trump said, “very dangerous & filthy.” Among the largest 30 American cities, Baltimore has the highest crime rate, and is a close second to Detroit for the highest rate of violent crime. But for murders, Baltimore is second to no other city, with more than 50 homicides per 100,000 people. That puts Charm City in the ranks of Jamaica, Venezuela and El Salvador in terms of lethality.

Baltimore Police Commissioner Michael Harrison hoped to address this crisis with his recent crime plan, but Baltimore City FOP President Mike Mancuso said it will do little to help. First and foremost, they don't have the staff - they don't even have enough officers to respond to all 911 calls. That's not to mention their lack of other resources.

In Mancuso's statement you'll also get a glimpse of his feelings toward Commissioner Harrison. Mancuso says he was left "speechless" by Harrison's claim the city isn't all that bad.

"This leads us to Commissioner Harrison’s recent public assertion that Baltimore is not a dangerous place; a comment which left me speechless," Mancuso wrote. "For him to try to alleviate the public’s fear of being a victim of violent crime by stating that most suspects and victims know each other, is outright fantasy."

Trump started his feud with Baltimore officials after House Oversight Committee Chairman Elijah Cummings (D-MD) confronted border patrol agents at a recent round of hearings. The president tweeted directly at Cummings, suggesting that the congressman focus on his struggling Maryland district instead of trying to upend his administration's policies.

Rep, Elijah Cummings has been a brutal bully, shouting and screaming at the great men & women of Border Patrol about conditions at the Southern Border, when actually his Baltimore district is FAR WORSE and more dangerous. His district is considered the Worst in the USA......

67.8K people are talking about this

The city of Baltimore, Trump added, is "a disgusting, rat and rodent infested mess."