Alabama and now Maine. Dems new motto..."If at first you don't succeed, keep on cheating until you do succeed".

Outgoing Republican Maine Gov. Paul LePage took a swipe on Friday at a Democratic candidate’s victory in a controversial House race, writing “stolen election” next to his signature on the certificate confirming the election result.

“I’ve signed off on the [Maine's 2nd congressional district] election result as it’s no longer in federal court,” LePage wrote in a tweet, attaching of the certificate with the phrase “stolen election” next to his signature. 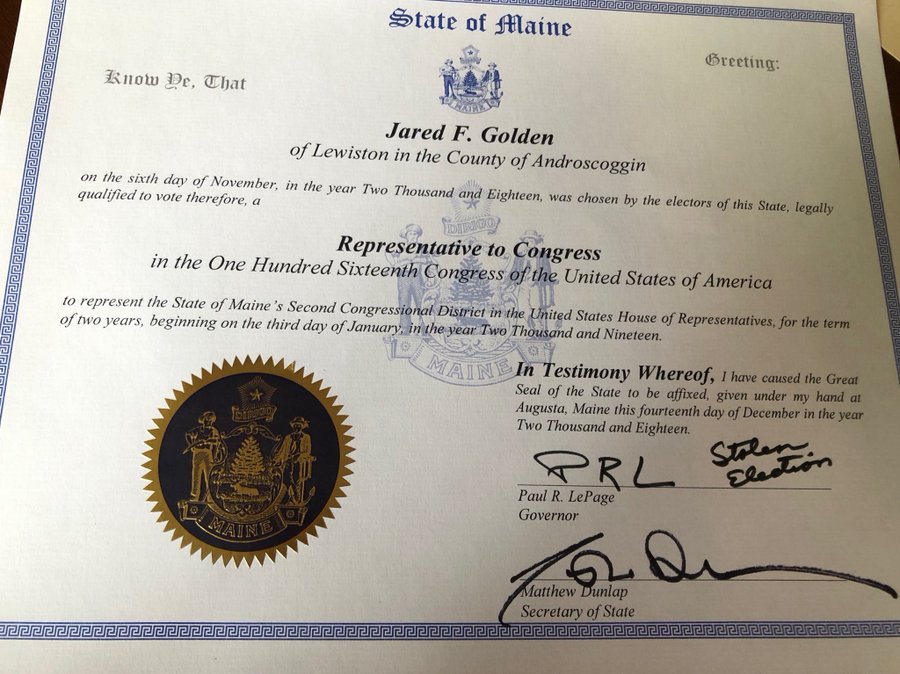 The controversy over the race stems from Maine’s “ranked-choice” electoral system, where, if no candidate receives an outright majority of the votes, a second tally is triggered. In that case, the second and even third choices of some voters are added to the total count.

The Republican initially received about 2,000 more voters than the Democrat, short of the outright majority. But Golden managed surge ahead of Poliquin after second preferences from ballots supporting two other independent candidates were re-allocated.

The incumbent congressman claimed that the system was unconstitutional and requested that the courts either declare him the winner or order another election be held.

Maine's top state court last year warned that ranked-choice voting conflicts with the state's constitution, which says the winners of state-level races are whoever gets the most votes, or a plurality.

The Golden's upset victory is a setback for Republicans in Congress, who lost the control of the House following the midterm elections.

LePage is being replaced by Democratic state Attorney General Janet Mills, who became the first female governor in the state and the first Democrat to hold the office in over a decade.

The Republican, who served as the state’s governor for eight years, couldn’t run again due to term limits. He previously told reporters that he’s retiring from politics and will be moving to Florida due to low taxation.

SCOTUS  has final say when a state judiciary do not follow a state's constitution.  He should appeal, directly.

LePage is GONE from Maine for good--a blessing to all the people of that state who have at least half a brain.  The man is a dingbat!