TeaParty.org) – Every aspect of the accusations brought against Brett Kavanaugh has been framed by carefully plotted timing on the part of the Democrats.

But just when they least expected it, their own tactics have been used against them–and they’re not pleased.

Fox News reports that Republicans in the Senate Judiciary Committee stunned Democrats when they released a statement late Wednesday explaining that they had been in communication with two men who said they may have been the ones responsible for the account of sexual assault that Christine Blasey Ford has given us, rather than SCOTUS nominee Brett Kavanaugh, casting even further doubt on her story.

is painfully clear that the Republicans, led by Sen. Grassley, deliberately chose to not share this vital information with Democrats until just the right moment.

NBC News reports that Democrats are pretty steamed, if the words of one unnamed congressional aide is any indication:

“Twelve hours before the hearing they suggest two anonymous men claimed to have assaulted her,” the aide stated. “Democrats were never informed of these assertions or interviews, in violation of Senate rules.”

“Some might find it exceedingly difficult to imagine Judiciary Committee Democrats expressing this complaint with straight faces,” Sen Orrin Hatch chuckled on Twitter, mocking Dems for their hypocritical outrage.

This stealthy move comes as more accusations against Kavanaugh–each less believable than the next–come forward, such as Deborah Ramirez’s alleged encounter with Kavanaugh when she was admittedly blackout drunk and attention-obsessed Michael Avenatti’s client’s loosely woven account of gang-rape parties at which Kavanaugh was unreliably fingered as “present.”

Neither of these accusations may have had quite the weight they did without being timed after Ford’s–but unfortunately for Democrats, they’re still pretty ineffective, especially in light of this new revelation from congressional Republicans.

“On Monday, the timeline recounts GOP staff members interviewing ‘a man who believes he, not Judge Kavanaugh, had the encounter with Dr. Ford in 1982.’

“The ‘encounter’ refers to an episode in which Ford claims that Kavanaugh sexually assaulted her in a bedroom at a Maryland house party.

“They had a follow-up interview with that man, and he provided more detail about the assault.

“Then on Wednesday, the committee staff said they spoke with a second man who said he assaulted Ford in 1982.”

This seems to be the most lucid revelation that’s come forward.

It seems likely that something happened to Dr. Ford, and no one, least of all Kavanaugh, has cast doubt on that:

As time goes on, it seems less and less likely that it was Kavanaugh that assaulted Ford or any of these other women, but one thing is for sure…the way Democrats reacted to news of these two men seems to indicate very clearly how much this narrative upsets their carefully planned timing. 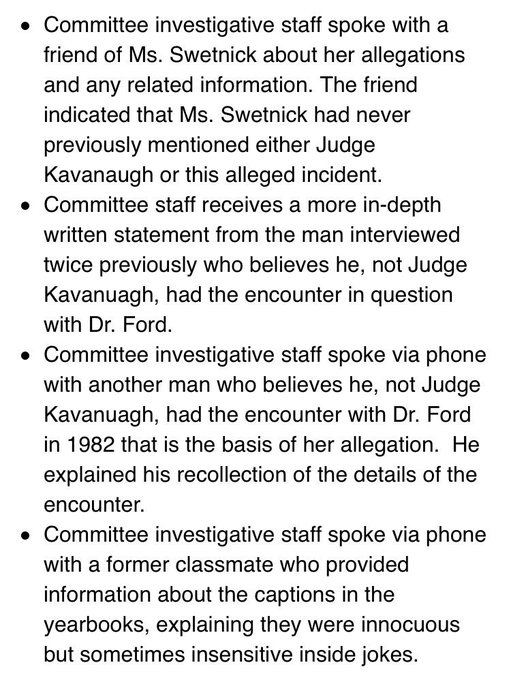