Obama reportedly vowed to speak out against the Vermont socialist Sanders if it appeared as if he could actually win, Politico reported.

“‘Back when Sanders seemed like more of a threat than he does now, Obama said privately that if Bernie were running away with the nomination, Obama would speak up to stop him,’ Politico wrote. “An Obama spokesperson, however, reportedly noted that the former president has stated that he would get behind the Democratic nominee regardless of who it is.”

One adviser said that while they personally had no knowledge of this, the threat of a Sanders nomination would likely be cause for action.

“I can’t really confirm that,” the adviser said, regarding the possibility of Obama trying to stop Sanders. “He hasn’t said that directly to me. The only reason I’m hesitating at all is because, yeah, if Bernie were running away with it, I think maybe we would all have to say something. But I don’t think that’s likely. It’s not happening.”

This aversion to Sanders would be in line with Obama’s recent comments. At an Obama Foundation Summit event in October, Obama took aim at political “wokeness” and cancel culture.

“This idea of purity and you’re never compromised and you’re always politically woke, and all that stuff, you should get over that quickly,” Obama said.

Obama also had some disparaging things to say about his old partner, Joe Biden.

The former president has been meeting with hopefuls in his Washington, D.C., offices for months, “Ostensibly the meetings are for the aspiring candidates to gain some wisdom from the last Democrat to win an open presidential primary and the presidency, but they also allow Obama to collect his own intelligence about what he and his closest advisers have made clear is all that matters to him: who can beat Donald Trump,” Politico writes.

Sometimes he offers candid advice about his visitors’ strengths and weaknesses. With several lesser-known candidates, according to people who have talked to him or been briefed on his meetings, he was blunt about the challenges of breaking out of a large field. His advice is not always heeded. He told [former Massachusetts Gov. Deval] Patrick earlier this year that it was likely “too late” for him to secure “money and talent” if he jumped in the race. Occasionally, he can be cutting. With one candidate, he pointed out that during his own 2008 campaign, he had an intimate bond with the electorate, especially in Iowa, that he no longer has. Then he added, “And you know who really doesn’t have it? Joe Biden.”

In April, when Biden announced he would be running for the Democratic nomination, Obama issued a statement through spokeswoman Katie Hill.

“President Obama has long said that selecting Joe Biden as his running mate in 2008 was one of the best decisions he ever made. He relied on the Vice President’s knowledge, insight, and judgment throughout both campaigns and the entire presidency. The two forged a special bond over the last 10 years and remain close today,” the statement said.

The statement was notably lacking a formal endorsement.

Biden, though, said he had personally asked Obama not to issue an endorsement. “I asked President Obama not to endorse, and he doesn’t want to. Listen, we should — whoever wins this nomination should win it on their own merits,” he said when asked by reporters why Obama had not endorsed him.

The New York Times also reported that Obama quietly urged Biden not to run. “The two men spoke at least a half dozen times before Mr. Biden decided to run, and Mr. Obama took pains to cast his doubts about the campaign in personal terms,” The  Times wrote in a piece headlined “Obama’s and Biden’s Relationship Looks Rosy. It Wasn’t Always That Simple.”

As Sargent Shultz (the character in the old Hogan Hero's show) would say ...  Arte Johnson doing an imitation of  Sargent Shultz's  "Very Interesting".  I don't doubt that Obama would potentially intervene, if not publically surely privately, to circumvent Sanders from becoming the Democratic Candidate.  The very fact that Bernie and his sidekick AOC could garner so much support attests to just how radical and uber left that today's Democratic Party has become.  No longer even do they attempt to conceal their true agenda but rather proudly put it out there for all to hear and see as they did when all quickly and proudly raised their hands, in the first Democratic Presidential candidate debate, supporting the giving of FREE Benefits and healthcare to Illegals.

OUT OF TOUCH?  Look how many legal Americans daily have to sacrifice paying huge sums of money for hospital bills and healthcare only to have Democratic candidates pander to the "one group" that they are planning on to tap to ensure that they can make it to the White House.  They aren't concerned about most Americans and they know that due to Donald Trump's success in having success in raising up minorities that many will turn to vote for Trump or just not vote to erode their "in the bank", guaranteed, minority support.  Illegals, once they guarantee they can put them in a position to vote, will permanently secure their grasp on Political power for generations to come.  Can you imagine a Bernie Sanders/AOC ticket?

One other possibility I believe deserves to be considered as a viable possibility is that Hillary Clinton will swoop into the election right at the final moment to steal away the delegates and waining support that the other candidates have fought for.  I believe that even Biden is now seen as a threat ensuring a Trump victory and thus Obama could work to even urge another candidate to run or from behind the scenes be obvious of who he supports.  Then his track record, with most voting Americans hasn't been so good on the endorsement front.  He's solid gold for the Democrats as far as winning office but a sinking ball and chain around the neck of candidates whom he has endorsed and promoted for various offices.  Still, though he is the default leader of today's Democratic party at least until one of the uber radicals assumes that position.

I think there are more than one reason that Obama does not come out in public support of Biden, at least for now, and among them are just the thing that is getting press about Hunter Biden's business bonanzas in the Ukraine and China while Obama/Biden was in power.

"The statement was notably lacking a formal endorsement.

Biden, though, said he had personally asked Obama not to issue an endorsement. “I asked President Obama not to endorse, and he doesn’t want to. Listen, we should — whoever wins this nomination should win it on their own merits,” he said when asked by reporters why Obama had not endorsed him."

IF you believe that I have a bridge to sell you. 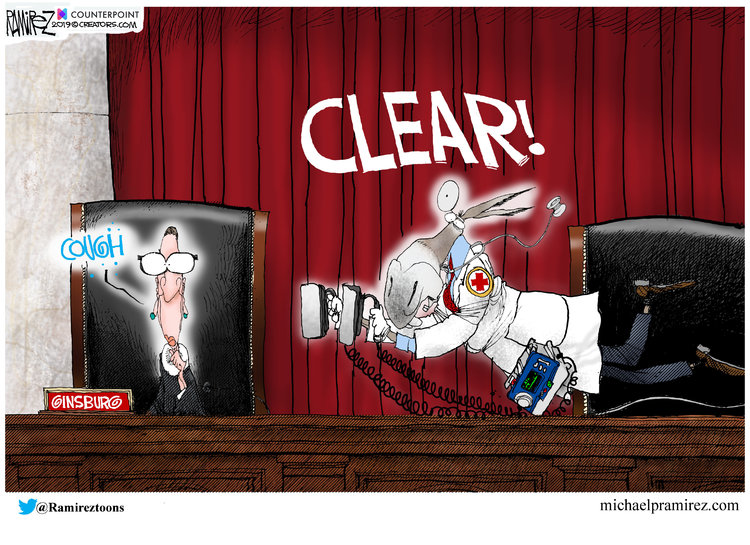 Can you think of anything that instills FEAR in Liberals more than the thought that RBG is about to die giving Trump and the Republicans yet another Supreme Court Pick?   You can hear it now though they will all be BESIDE THEMSELVES when Mitch McConnel actually fills the vacancy, if there is one, in the last year of Trump's Term when he held up filling the last vacancy, in an election year, before Trump was elected denying Obama his chance to fill that vacancy.  Democrats, liberals, and especially the Media will be uncontrollable with outrage, seething anger, and insanity if and when McConnel does this.  There will be cries of unfairness and just about everything else but would suit the Democrats if this happened because it's evident that Democrats care nothing of fairness as has been proven in their recent coup/impeachment show.  This process was in no way fair to the President and was absolutely totally controlled and partial on the democrat's side and nothing like the Impeachments of Clinton and Nixon where there was consideration given each side. This Schiff process was totally loaded in favor of the Democrats allowing NO witnesses that they didn't want to allow and filled with outright lies against the President, most lies revealed to have actually come from the committee head Schiff himself and were revealed to be lies by the actual transcripts of the conversation.

It was and is and remains a total sham.  What's going to be just though is if the Democrats impeach then it will go over to the Senate where Republicans will then be able to control the show and actually call the very witnesses that they sought to call during the House phase of this sham.  Can't you just hear the Democrats, in Congress, all yelling, squealing to the top of their lungs like pigs when they are shocked?

Jack HammerPost Master
When RBG can't be shaken woke and she stinkth, her and the broom
she rode in on will be permafrost as long as it takes.
Like Reply (0 Likes)
Take Action
Back To Top

Is Mustard Good for You?
55 minutes ago

Drawing Up Sides for the Civil War
60 minutes ago

The Top 5 Countries in the World
18 hours ago