Another wave of incoming freshman in college football made their commitments this past week during some of the All-American games. A handful of teams were able to shoot up the rankings because of these commitments, shaking up the current recruiting landscape.

The Sooners might have been the biggest winners of the week, landing the commitment of the top wide receiver in the country. The USC Trojans were also coming away from the weekend ecstatic, landing their only two 5-star recruits.

Even some of the smaller programs were able to land their biggest commitments of the year, so let's take a look at the top 25 recruiting classes following the All-American games.

All-purpose back Wandale Robinson showed some impressive toughness and dove out for a couple of nice catches in the All-American Bowl on Saturday. Scott Frost doesn't have the most dominant class this year, but no one will be surprised when these incoming freshmen develop into productive college players.

Rondale Moore proved to be one of the most electric freshmen in college football this season. He'll have some extra help in 2019 now 4-star wide receiver David Bell has committed to the Boilermakers. Purdue had a pair of All-American commits between Bell and George Karlaftis play on Saturday, so things are looking up for a team that is trying to make some noise in the Big Ten.

The Rebels are looking to reload and retool their offense in 2019. They were able to land a top-50 recruit in running back Jerrion Ealy, while also grabbing two 4-star receivers (Dannis Jackson and Jonathan Mingo). The Rebels have produced some legitimate NFL players at those positions, so those three freshmen will be hoping they can keep that trend going.

South Carolina has our first 5-star commitment in these rankings thanks to strong-side defensive end Zacch Pickens. He's going to be terrifying SEC offenses in the coming years, but the Gamecocks were also able to get All-American quarterback Ryan Hilinski, who will have a good chance to become their starter sooner instead of later.

Another Henry brother is heading to play tight end at Arkansas. The brother of Hunter Henry, Hudson Henry will be looking to make an impact right away as the No. 2 tight end in the country. The Razorbacks will be getting a couple of 4-star wide receivers as well, along with an explosive dual-threat quarterback in KJ Jefferson.

Offensive tackle Charles Cross highlights the Bulldogs' recruiting class as their only top-100 commitment. Dual-threat QB Garrett Shrader will be another name to keep an eye on to see if he's able to compete to replace Nick Fitzgerald under center.

The Huskies were able to grab a pair of top-100 defensive tackles in the 2019 class thanks to the commitments of Faatui Tuitele and Jacob Bandes. The top player in the state of Washington is also coming to play for the Huskies, so fans will be interested to see quarterback Dylan Morris in the coming seasons.

Stanford's offense got a need infusion of talent in this recruiting class with top-100 commitments from RB Austin Jones and WR Elijah Higgins. On defense, the Cardinal was able to get the top player in the state of Kentucky in weak-side defensive end Stephen Herron Jr..

Head coach Willie Taggart's first full recruiting cycle can be considered a success. Not only was he able to land a 5-star recruit (CB Akeem Dent), but they were also able to add two more promising safeties that are also ranked in the top 100 with Nick Cross and Brendan Gant.

The Volunteers have a chance to snag two of the best offensive tackles in the country this year. They already have a commitment from 5-star OT Wanya Morris, but they also have a top-10 recruit and another 5-star tackle Darnell Wright who is considering joining the Volunteers.

Brian Kelly may not have any recruits inside the top 100, but he does have six in the top 200. Three of those players are offensive linemen, including the top player in the state of Minnesota, offensive tackle Quinn Carroll. It's not the best recruiting class we've seen for Notre Dame, but it's certainly not a bad group of young men.

Even with Urban Meyer retiring, the Buckeyes are still getting a lot of really good talent, focusing on quality over quantity so far. The second-ranked wide receiver in this class, Garrett Wilson, looked like a stud in the All-American Bowl with a pair of touchdowns. With two other 5-star recruits and incoming transfer quarterback Justin Fields, this team is set for the new post-Meyer era.

The Tigers were able to land Owen Pappoe, a 5-star recruit and the top outside linebacker in the country. Dual-threat quarterback Bo Nix will be looking to compete for the starting QB job now Jarrett Stidham is heading to the NFL.

It was a great week for the Gators, who were able to add their two highest-rated recruits in CB Chris Steele and WR Arjei Henderson. If they can land another 4-star cornerback in Kaiir Elam, who is leaning toward the Gators, then this is going to be a terrific recruiting class for Florida.

No team had more to celebrate about after the All-American Bowl than the USC Trojans. Not only were they able to add a 5-star recruit in WR Kyle Ford, but they also added the top athlete and a top-10 player in Bru McCoy. If Kliff Kingsbury stays at USC, he's going to have a lot of fun utilizing these two guys.

Hoping to continue contending in the Big Ten, James Franklin's recruiting class is helping them reload on both sides of the ball. The top player in the state of Virginia, Brandon Smith, will be a future centerpiece of the defense, while 4-star running back Noah Cain is hoping to fill the shoes of previous backs like Saquon Barkley.

Inside linebacker recruit De'Gabriel Floyd was all over the place in the All-American Bowl, playing well against some good competition. That's an exciting snag for Tom Herman, who was also able to land some solid 4-star recruits on offense, including a pair of offensive tackles and another pair of wide receivers.

This year's class for the Ducks is highlighted by Kayvon Thibodeaux, the No. 2 overall player in this year's recruiting class. The Oregon defense should be much more intimidating when you also consider the commitments of top-50 recruits in CB Mykael Wright and ILB Mase Funa.

The drama surrounding 5-star recruit Daxton Hill seems to have subsided now he has recommitted to the Wolverines. That's a huge get for Jim Harbaugh and his only top-10 recruit in this class. Michigan was also able to add RB Zach Charbonnet and DT Chris Hinton as their other two top-50 commits.

Considering how many talented underclassmen the Tigers have, not having a top-five recruiting class is by no means the end of the world for Dabo Swinney's team. The good news is that both 5-star recruits, Andrew Booth and Frank Ladson, will continue the long line of great cornerbacks and wide receivers to come out of the program.

One of the best programs at producing NFL-caliber talent at running back will be getting another big name. John Emery Jr. is the second-ranked RB in the class and will be staying in his home state to try to prove himself to NFL scouts over the next couple of years.

LSU already has two 5-star recruits but is waiting on a third in Ishmael Sopsher, hoping he will choose the Tigers over the Crimson Tide to help them jump ahead of a couple of teams currently ranked ahead of them in this recruiting class. 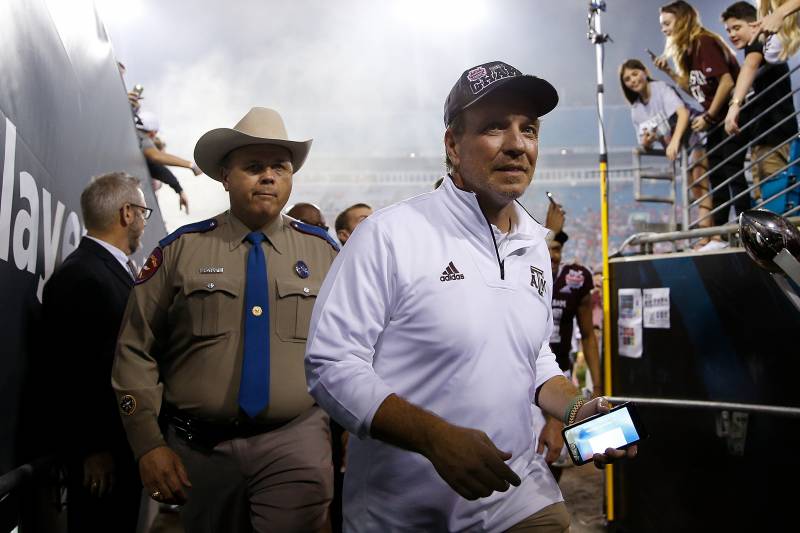 Jimbo Fisher made sure to add some talent in the trenches for 2019 with two 5-star recruits in offensive tackle Kenyon Green and big defensive tackle DeMarvin Leal.

The Aggies secondary will also be in good shape for the next few years with the addition three defensive backs in the top 100 with Brian Williams, Demani Richardson  and Erick Young. Add in the top tight end in the country, Baylor Cupp, and you have an exciting recruiting class.

Lincoln Riley is one of the best offensive minds in football, so it's no surprise that a plethora of talent on that side of the ball flocked to Oklahoma.

The Sooners class took a big jump when Jadon Haselwood, the top wide receiver in the nation, committed to them during the All-American Bowl. He'll be catching passes in the near future from Spencer Rattler, the top pro-style quarterback.

Rattler and Haselwood will be joined by three more top-100 recruits with wide receivers Theo Wease and Trejan Bridges along with tight end Austin Stogner.

Defense seemed to be the primary focus for Kirby Smart's Bulldogs in this recruiting class, and it paid off in a big way for that side of the ball.

Along with a solid commitment from 4-star DB Tyrique Stevenson on Saturday, Georgia had already locked up commitments from the top-ranked weak-side defensive end and inside linebacker in Nolan Smith (also the top-ranked player overall) and Nakobe Dean.

On the other side of the ball, the Bulldogs were also able to snag the best center in this year's class with Clay Webb along with Dominick Blaylock, a promising 5-star receiver.

Georgia fans are hoping this loaded recruiting class will help them continue to compete for a national championship. The best team in college football keeps getting better this offseason with another absolutely stacked recruiting class. Nick Saban was able to add a pair of big-time recruits in Marcus Banks and Khris Bogle, who both committed during the All-American Bowl, to add to what was already the top class in the country.

There are too many names to keep track of in Alabama's incoming freshman class, but fans will be excited to see Taulia Tagovailoa, the younger brother of Tua, and the top-ranked running back in Trey Sandersas some of the more exciting names in this group.

As long as Saban is the head coach of the Crimson Tide, this team is going to continue to be at or near the top of these rankings. 60 NFL One Hit Wonders