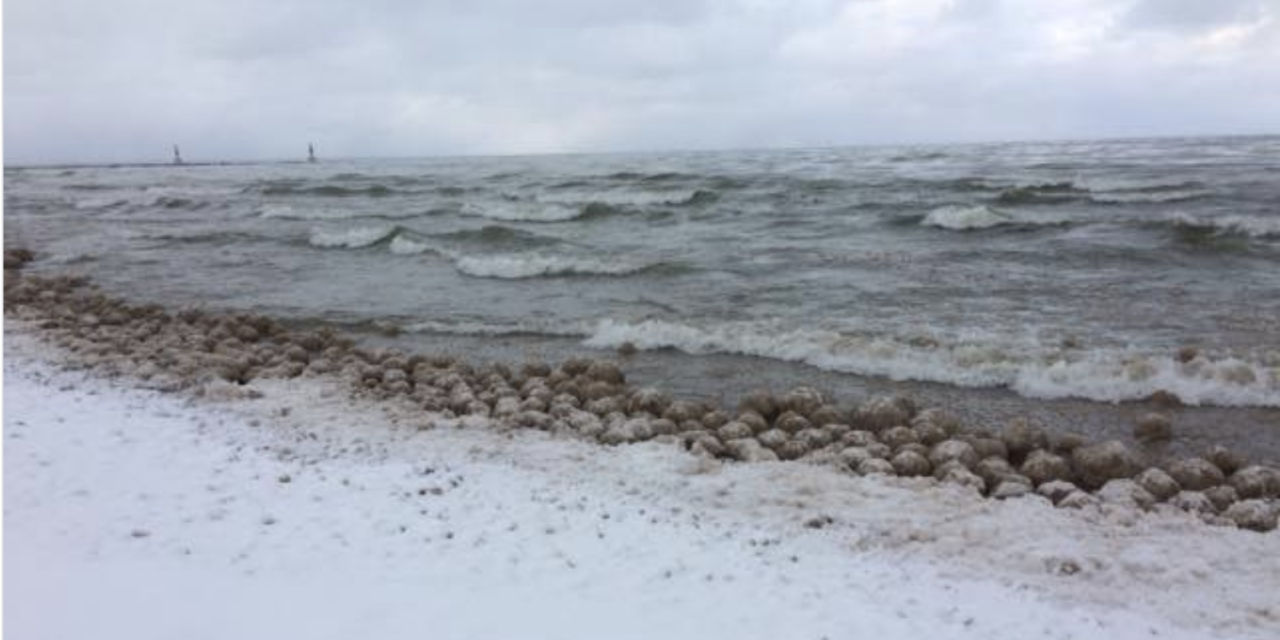 An extremely rare phenomenon is taking place in Michigan as a result of a recent cold front that moved in. Thousands of what is being called “Ice Balls” have been reported washing as**** lake Michigan ranging from the size of baseballs to large yoga balls, resulting in the Michigan lakes**** completely covered.

According to a meteorologist at CNN, these Ice balls form when turbulent water near the s**** breaks up a layer of slushy ice. Something else extraordinary is also happening with the formation of what is being called an “ice volcano”, which is reportedly a cone-shaped mound of ice formed over a terrestrial lake by the eruption of water and slush through an ice shelf.

“Ice volcanoes occur in locations in which waves hit accumulated ice on the s****line with some force,” said Cort Spholten, a meteorologist with the National Weather Service of Grand Rapids.

“We were cold enough to form ice on the s**** of Lake Michigan and water had broken the surface of that ice,” Spholten said. “The waves … were strong enough so the water channels through, it squeezes water upwards and tosses the floating ice up. As it happens, over the course of hours or days, it forms a cone and it resembles a volcano.

I'm old; I remember the time that you could spell out the work s-h-o-r-e.

S h o r e became a *dirty word* about the time "conversating...tooken..borrowed me" among other things became OK to use.

Jack HammerOld Faithful
If you need to use that word you should say it like, 'I was out with a
lakeside last night or if it was from Florence it's out with a riverrat
last night.
2/18/2012:31 PM
❤️ 1

NYC Mayor Threatens to Shut Down Synagogues, Churches: But not Mosques
3 hours ago

Another one Bites the dust ... Legends Steakhouse now closed
6 hours ago

Mike Lindell responds to liberal media’s onslaught: ‘I used to think ‘are they really that evil?”
8 hours ago