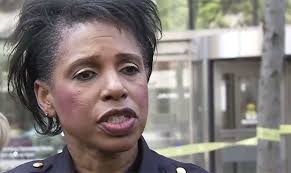 Something tells me she's going to need an army just to handle the names she gets called because of this ridiculous mess. Liberals have lost their minds!!

Seattle's chief of police said in a Monday night video that she wants residents to call 911 if called racist names during the coronavirus pandemic.

"Washington state is no place for hate. In a show of solidarity between police and community, I'm joined today by Lori Matsukawa," Chief of Police Carmen Best said, referring to the retired KING 5 news anchor who joined her in the video.

"Hate crimes have no place in our community," Matsukawa continued. "We're better than that, Washington. We're all trying to deal with the COVID-19 public health crisis together. If you are a victim of a hate crime or hate-based harassment, please call 911."

"Exactly," Best said as the video cut back to her. "We will document and investigate every reported hate crime. Even racist name-calling should be reported to police. We take this information very seriously. If aren't sure if a hate crime occurred, call 911. We are here to help and will respond to investigate."

"When we work together," Matsukawa said. "We're safer together," Best said, finishing her sentence.

As the coronavirus pandemic has infected more and more Americans, there's been an uptick in incidents of bias against Asian-Americans who say they are being blamed for the coronavirus, which originated in China.

The message to Seattle citizens that they should call 911 because of racist name-calling comes as Washington has the seventh most confirmed coronavirus cases of any state, as of Tuesday morning, with 5,187. It is second only to New York in deaths with 219.

Hate speech is broadly protected by the First Amendment, meaning there is likely little the Seattle Police Department will be able to do if an incident of racist name-calling is reported. The department would be able to prosecute hate crimes, which under Washington state law include "physical injury" to a person, "physical damage" to a person's property or threats that would put a reasonable person "in reasonable fear of harm to person or property."

Jack HammerOld Faithful
I guess some people needed something to complain about, they
didn't say much when antifa was running savagely singling out the
oldest of the White guys and their wife's to beat unconscious.
That's your everyday common liberal.
3/31/204:53 PM
❤️ 0
JH1961Hall of Famer

I'll bet the Chief was a 'tattle tale' in school. Yeah...I just told you all how old I am.

so much for free speech,,,

what is racist?   wearing a trump hat?

This is such an empty argument and basically an ongoing facade.  Racism is bad but racism is not under attack or being punished because if it was then all racism would be decried rather then only racism from one source.  The way most liberals, like this woman, define racism is if it only comes from a white individual against any other minority.  Fact is that minorities are also racist, or some are, as it's a function of being human, we all sin in various ways and hatred or racism is one of those things that unfortunately knows no single color or source.

Another thing that concerns me about this proclamation is it throws the door open to using racism as a weapon against someone that a person doesn't like.  Racism is one of those things that is so easy to throw around as if it happened but is often more a case of he said she said type thing.

True racism, is an ugly thing no matter the source or the target of it and all racism should be decried but unless you are going to attack all sources of racism rather than only singling out one source then you are effectively approving of racism so long as the target is an accepted one or the source is from an approved one.

GB...the left has been doing this for years!!! A company can have the sorriest piece of crap working for them....lazy...laying out half the time...coming in late and leaving early...doing drugs at work...and if they are black...Hispanic...Asian....anything except white and the company fires them..."RACISM"! I've seen this too many times.

"Another thing that concerns me about this proclamation is it throws the door open to using racism as a weapon against someone that a person doesn't like.  Racism is one of those things that is so easy to throw around as if it happened but is often more a case of he said she said type thing".

I was actually told  once, by a school superintendent, 'the reason you weren't hired is because you are white'.

I have missed job because of age, color.   government over reach,, individual or business should be allowed to make own decisions.  diversity hurts government employment.  hire the best candidate or hurt your business.    Company I worked for was ordered to hire minorities,, couldn't find minority managers so started fast tracking women past white men.   then woman complains when with 4 years experience she was paid less than white male manager who had been with company 20 years that she was paid less.  which if she couldn't figure it out, probably shouldn't be a manager.  They fast tracked a woman who had stayed home with kids, then when divorced reentered workforce. three years with company they fast tracked past my 10 years and yes I was expected to train her.

what are BLM and NAACP doing ?
27 minutes ago
A&E Pulls ‘Live PD,’ and COPS from TV Schedules
15 hours ago