Right after the Obamas got involved. What will they do with his two cohorts that confessed to helping him carry out the hoax?? And, just how does he claim he's innocent after 10,000 dollars and 16 hours of community service spent in Jessie Jackson's office, as someone suggested, napping. Nothing really....but come on dems!!!

CHICAGO – An internal email from the office of Cook County State’s Attorney Kim Foxx, obtained by Fox News on Wednesday, asked assistant state's attorneys to dig for any examples to bolster Foxx’s claim that the dropped charges in the Jussie Smollett caseweren’t as uncommon or shocking as they seemed.

The email read in part, “We are looking for examples of cases, felony preferable, where we, in (exercising) our discretion, have entered into verbal agreements with defense attorneys to dismiss charges against an offender if certain conditions were met...”

The email added, “Nobody is in trouble, we are just looking for further examples of how we, as prosecutors, use our discretion in a way that restores the victim…”

It was not clear who sent it, and exactly when it was sent. Foxx recused herself from the case last February but defended her office offering Smollett “an alternative prosecution model” in a series of interviews Wednesday. 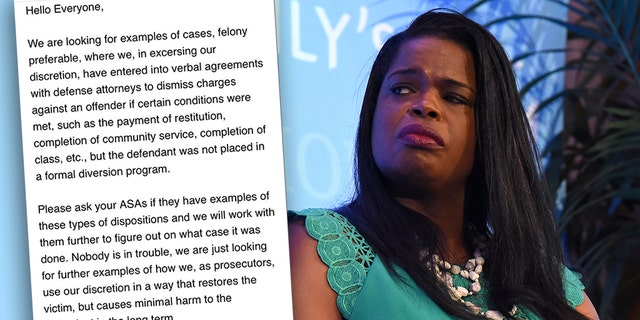 An internal email from Kim Foxx’s office obtained by Fox News asked workers to dig for examples bolstering Foxx’s claim that the dropped charges in the Jussie Smollett case weren’t as uncommon or shocking as they seemed. (Getty, File)

Illinois Attorney Rod Drobinski told Fox News that because a special prosecutor was not appointed in the Smollett case, there were appearances of impropriety on behalf of Foxx's office. “Even the prosecutor said it was a strong case. That makes it even more unusual that they didn’t demand that he admit to what he did as part of this dismissal.”

Foxx has been defending the decision by her staff to drop charges against the “Empire” actor after investigators revealed he allegedly staged a racist, anti-gay attack.

Foxx told Fox 32 on Wednesday she believed the matter was handled properly for a case of its kind. She pointed to Smollett forfeiting his $10,000 bond and doing community service.

“When we look at similarly situated people charged with this offense, without a background, I think in this case, justice was, um, appropriate,” Foxx told Fox 32 Chicago. “He was availed to an alternative prosecution model that anyone without these riches, without this fame, would also be availed to.”

Cook County prosecutors dismissed all charges but still maintained Smollett lied about being attacked in downtown Chicago on Jan. 29. And Mayor Rahm Emanuel has called the dropping of charges “a whitewash.”

Smollett’s attorney, Patricia Brown Holmes, said in a statement: “We are disappointed the local authorities have continued their campaign against Jussie Smollett after the charges against him have been dropped. The facts are clear.  The Assistant State’s Attorney appeared in court and dismissed the charges. Mr. Smollett forfeited his bond. The case is closed. No public official has the right to violate Mr. Smollett’s due process rights. Mr. Smollett, like every citizen, is innocent until proven guilty in a court of law. Mr. Smollett is entitled to the same Constitutional protections as any citizen charged by the government with a crime— including the right to speak freely about his innocence, the right to be viewed as innocent until proven guilty in a court of law, and the right to hold the State to its burden of proving him guilty beyond a reasonable doubt.  None of that has occurred in this case.”

The National District Attorneys Association, which claims to represent roughly 2,700 prosecutors’ offices around the country, heavily criticized Foxx in a statement to Fox News.

“First, when a chief prosecutor recuses him or herself, the recusal must apply to the entire office, not just the elected or appointed prosecutor. This is consistent with best practices for prosecutors’ offices around the country,” the statement began.

It added, “Second, prosecutors should not take advice from politically connected friends of the accused. Each case should be approached with the goal of justice for victims while protecting the rights of the defendant. Third, when a prosecutor seeks to resolve a case through diversion or some other alternative to prosecution, it should be done so with an acknowledgement of culpability on the part of the defendant. A case with the consequential effects of Mr. Smollett’s should not be resolved without a finding of guilt or innocence.”

The statement concluded: “Fourth, expunging Mr. Smollett’s record at this immediate stage is counter to transparency. Law enforcement will now not be able to acknowledge that Mr. Smollett was indicted and charged with these horrible crimes and the full record of what occurred will be forever hidden from public view. Finally, we believe strongly that hate crimes should be prosecuted vigorously but the burden of proof should not be artificially increased due to the misguided decisions of others.”

Jack HammerOld Faithful
I pretty sure the normal people of the country know very well who
the misguided decisions belong to, hire a kangaroo and there's your
so called court of law.
Karma be not absent
3/28/198:35 AM
❤️ 0

They are saying they cut a deal with Smollet and let him pay a fine and do community service for his crimes...he is running around saying "told you I was innocent". 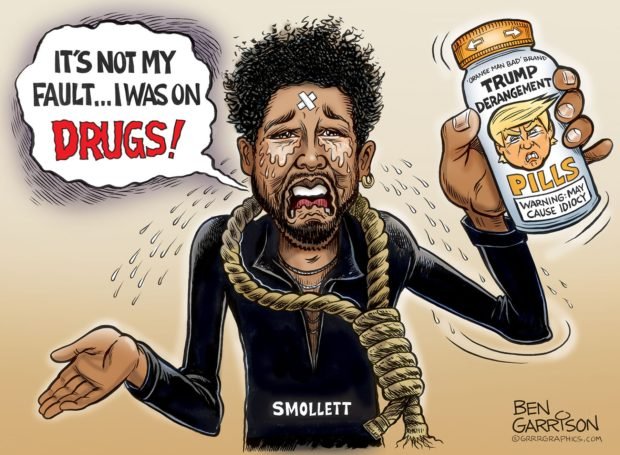 Is it hypocritical of Republicans to not accept the Smollett decision, but hang their hat on the decision of Barr?

Asking for a Republican friend.

Jack HammerOld Faithful
You can tell who's speechless when someone compares Barr to an
actually racist criminal, it might not be over yet.
3/30/191:20 PM
❤️ 0

Jack Hammer posted:
You can tell who's speechless when someone compares Barr to an
actually racist criminal, it might not be over yet.

March 28 (Reuters) - U.S. President Donald Trump said on Thursday that the Department of Justice will "review" the case of actor Jussie Smollett, who was charged with staging a fake hate crime in Chicago before prosecutors abruptly dropped the case this week.

Trump wrote in an early-morning Twitter message announcing the review that the case had embarrassed the nation.

Smollett, who is black and gay, said two men attacked him on the street at night in January, making homophobic and racist remarks, pouring a chemical on him and putting a noose around his neck while shouting support for Trump.

Investigators later charged Smollett with paying $3,500 to the two men to pretend to attack him in order to garner public sympathy for himself. Prosecutors dropped the charges on Tuesday, saying they stood by the accusation but that an agreement by Smollett to forfeit his $10,000 bond was a just outcome.

Smollett, 36, says he is innocent and did not stage the attack.

Tina Glandian, one of his defense lawyers, told NBC News on Thursday that she was not concerned by the review. "To my knowledge, nothing improper was done," she said in the interview.

She acknowledged that Smollett was friendly with the men he accused of attacking him, brothers Abimbola and Olabinjo Osundairo, and that he had spoken on the phone to one of them, who had been working as his fitness trainer, about an hour before the incident.

"He had a hard time believing his friend would be behind this," she said. Asked about Smollett telling police his attackers appeared to be white, Glandian speculated that the brothers, who are black, may have worn whiteface make-up.

The brothers have not spoken about the case since police said they confessed to being paid to stage the attack.

The county prosecutors' decision stunned the city's police chief, prompted the police union to demand a federal investigation, and enraged Chicago Mayor Rahm Emanuel, a Democrat, who called it a "whitewash" that made a fool of the city.

Trump, a Republican, echoed those remarks on Thursday.

"FBI & DOJ to review the outrageous Jussie Smollett case in Chicago," Trump wrote on Twitter, referring to the Federal Bureau of Investigation and Department of Justice. "It is an embarrassment to our Nation!"

The Department of Justice declined to comment or answer questions about the review.

The FBI has already had some involvement in the case, with agents investigating a threatening letter Smollett said he received prior to the attack, according to the Chicago Police Department.

The initial reports of two Trump supporters attacking a gay, black celebrity drew widespread sympathy for Smollett, particularly from Democrats. That faded quickly after the actor's arrest, and the case was seized on by some as an example of what Trump likes to deride as "fake news."

On Thursday, Mayor Emanuel said he would seek to have Smollett reimburse Chicago for the investigation costs, and rejected Trump's federal review, telling the president to "sit this one out."

Smollett is best known for playing a gay musician on the Fox drama "Empire." His lawyers said he hopes to move on with his career, but it remains unclear whether he will return to "Empire" after being written out of the last two episodes of the most recent season.

Chicago's chief prosecutor, Cook County State's Attorney Kim Foxx, has defended her office's decision as proportionate to what she described as relatively minor charges, saying that even if Smollett had been convicted he would likely not have faced prison time.

Foxx recused herself from the case after acknowledging she had discussed it with a relative of Smollett. (Reporting by Jonathan Allen in New York; Editing by Steve Orlofsky)

Jack HammerOld Faithful
Smollett, 36, says he is innocent and did not stage the attack.
Then it's time for the FBI outside of Chicago to arrest the two men
Smollett said attacked him on the street making homophobic and racist
remarks, pouring a chemical on him and putting a noose around his
neck while shouting support for Trump.
Investigators later charged Smollett with paying $3,500 to the two men to pretend to attack him in order to garner public sympathy for himself.
These two guys will have a great deal to say before they face jail time.
3/30/198:28 PM
❤️ 0
Back To Top