Question: What’s more damaging to the United States: Russia trying to interfere with a Presidential Election, or Hillary Clinton making money off selling our uranium to Russia, and having Robert Mueller deliver it in person?

Here’s what you should know about the Hillary Clinton Email grilling by Congress where Rod Rosenstein and FBI Director, Christopher Wray, gave excuses for why they are holding back documents.

It was completely absurd.

Absurd excuse no. 1: When asked about crimes committed by previous FBI or Justice Department agents, the stock answer, no doubt rehearsed along with the stock rebuttal by Rosenstein was: “I understand your concern”, was “I was not there.”

Get out of jail free card number one: “I was not there then.”

Nobody Says: Typical lawyer crap. You weren’t there, therefore you are not responsible. And you can’t ask the guy who was there, because they no longer work there.

Absurd excuse no 2: We can’t comment on an ongoing investigation, even to Congress. “We’re still investigating.”

These hard working agents are not even stopping to email their girlfriends, and Rod likes to say every other minute “We are doing this as exponentially as possible.”

Nobody Says: Three smart retired people in Iowa could have that done in 2 weeks. BS grows strong on Rod’s overloaded brain. Another lame excuse said with Rod’s usual “I understand (share) your concern.” was “We will go by the book”,

Absurd excuse no 3: We can’t give Congress our sources, because it would put them in danger. And, the committee (Congress) would not want us to turn over everything. So, you the Congress, you really don’t want to see this stuff.

Nobody Says: If those sources happen to be Obama, Hillary, either one of them, or even some communists in the CIA, like Brennan, then absolutely Congress does not need to know. Rod makes it look like he is protecting Congress, from ‘dangerous’ knowledge or boring stuff.

It’s the old, “If I tell you I might have to kill you.” a favorite excuse the government loves to use.

How does ANYBODY know if they even HAVE a legitimate source if nobody can see them?

The source could be the Mayor of London’s dentist. Or Maxine Water’s Hairdresser.

And yet, they want to claim truth and transparency. The whole dossier was fake, and yet, only one Congressman brought that fact up, and it was towards the end of the 5-hour grilling.

Absurd excuse No 4: President Trump appointed us. Therefore, whatever we say you can’t claim it’s political. 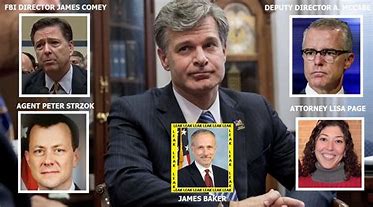 Nobody Says: FBI Director is a true blue, Never-Trumper Rino. Rosenstein was appointed by Jeff Sessions: Not exactly a Trump team player. Neither Christopher Wray OR Rosenstein will say ANYTHING against Hillary Clinton, nor give information about the emails.

Absurd excuse No 5: We are going to fix it. We have taken steps to make sure our agents never do this again. We have the finest agents in the world, and so we are making THEM go through the ridiculous exercise of never breaking the rules again, and how DARE you undermine their fine work.

Nobody Says: Right. WE didn’t undermine their fine work, you did. So, the FBI will punish the thousands of agents who committed no crimes and let the ones at the very top who committed the felonies, alone.

Okay, so we committed crimes? We’ll do the Starbucks game and punish everyone else for the crimes the top committed.

When the question comes to punishing the Clintons? “We will follow the rules.” Just like Comey did, right? Some rule. What rule was that?

All Clinton Crimes are exempt.

Nobody Says: I love it. Why doesn’t he just say Congress is invalid? He also said he doesn’t know who was in the room when they investigated Hillary. “We’re working hard on that.”

Absurd excuse no 7: Rod had this last bit to say. “Just because you have an opinion doesn’t mean you’re in contempt.”

Nobody Says: He was talking about himself. Or was he talking about Peter Strozok? It doesn’t matter, he believes you can hate the President and you can’t be prosecuted for that. Even if you are leading the investigation into him.

From Killing the Deep State by James Corsi:

The real Russia scandals? The Clinton campaign paid for the fake Russia dossier, then lied about it and covered it up.
Rosenstein was the only attorney put in office by George W. to stay on with Obama. Rosenstein, Comey, and Mueller all shared a history of working in the Department of Justice that traced back to the Clinton administration, with all three having worked on FBI investigations that ultimately resulted in exonerating the Clintons from any wrongdoing.

FBI Director James Comey is a Clinton fixer with a long history of running interference within the Department of Justice to make sure the Clintons are never prosecuted a loyalty that the Clintons have repaid in corporate board appointments that have earned Comey millions of dollars.

Mueller and Comey also combined to give Sandy Burger a pass on stealing sensitive Clinton administration related documents for the National Archives.

Obama used a pseudonym to communicate with Hillary. Robert Mueller and Loretta Lynch were all involved in the 2012 HSBC scandal in which the bank managed to avoid criminal charges in a massive money laundering drug scandal for which they paid a $1.9 billion dollar fine to the government.

And finally, Hillary had a private email server to hide the fact that she was not only making money off selling military hardware to Russia, but also our uranium. Podesta, her lawyer, also made millions off the Russians.

Mueller, Comey, and Rosenstein are all in on those treasonous crimes.

Long ago, America hung the Rosenburgs for selling nuclear secrets to Russia. And so, you must ask yourself again: What’s the biggest crime here?

The biggest crime here is that Hillary Clinton, Robert Mueller, James Comey, And Rod Rosenstein have been in collusion with Russia for many years.

And Congress does NOT need to know.

And neither do you.

Because, today, FBI Director Christophe Wray declared: “There is no deep state.”

Nobody Says: In that case, Christopher, you may not know it, but according to this Nobody: you are in a state of deep ****.

As Joe Biden calls for defunding the police
2 days ago