Is this a joke!!!???? Does she think the woman accusing Ellison deserves the same??

On MSNBC Tuesday, Hillary Clinton weighed in on the sexual assault accusation against Supreme Court nominee Brett Kavanaugh that allegedly occurred 35 years ago when he was in high school, arguing that "we should give the benefit of the doubt to the court and the country" rather than continuing with the confirmation process as scheduled. Her comments were met with fierce backlash from critics, including the woman whose accusation of rape against Clinton's husband was notoriously not given "the benefit of the doubt" by Democrats.

Asked by host Rachel Maddow if Democrats should play the kind of "hardball" Republicans played with blocking the Merrick Garland nomination, or "just go through regular order with whoever Trump has to put up next if the Kavanaugh nomination fails," Clinton called for neither "unilateral disarmament or Defcon-10." What she really wanted to see, she made clear, was an investigation.

Republicans have offered Kavanaugh's accuser, Christine Blasey Ford, the chance to testify in a public or private hearing on Monday, an offer her lawyer currently says she will not accept, demanding an FBI investigation first. An investigation into Ford's accusation by the FBI, Clinton told MSNBC, is "a reasonable request."

"The White House could answer [Ford’s request] very quickly by asking the FBI to reopen its background check and to take into account the accusation that's been made and to gather the evidence about what can be known. So far, they haven't done that," she said. "And as someone who has watched this process unfold over many years, there does have to be some direction given to the FBI to pursue an investigation."

Clinton's comments have elicited some strong responses, including from Bill Clinton accuser Juanita Broaddrick, who maintains that Bill raped her and Hillary threatened her to remain quiet:

Maybe we can have the @FBI investigate Juanita Broaddrick's against Bill Clinton, too?  @atensnut @JudicialWatch

For decades, Broaddrick has accused Bill Clinton of violently raping her in 1978. In 1999, NBC aired an interview with Broaddrick leveling the accusation, an interview which the network infamously only aired after the impeachment hearing.

A report on Clinton's comments by Grabien titled "Hillary: Kavanaugh's Accuser Deserves 'The Benefit of the Doubt'" made the rounds online, prompting more blowback from critics:

Every woman's allegations should be heard. Unless she was raped by Bill Clinton or Keith Ellison. 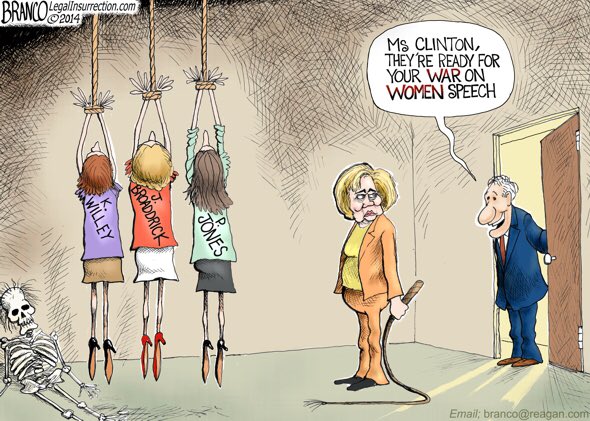 Where's Monica? Hillary didn't give her the benefit of the doubt & Monica had indisputable evidence!

The hypocrisy of the left is amazing. This may be the last woman on earth that should open her mouth about the subject.  Not only her record with Bill, but she and the others that cozied up to Weinstein and other men like him need to sit this one out. As a matter of fact she needs to crawl in her hole and stay there.

Democrats who ignored accusations against their own are now loudly clamoring for the need to fully investigate the politically timed accusations of sexual assault against Supreme Court nominee Brett Kavanaugh. Recall this past August that Karen Monahan, former long-term girlfriend of current DNC Deputy Chairman Rep. Keith Ellison (D-MN), accused him of domestic abuse. Ellison, who is running for Minnesota attorney general, denied the allegations and the DNC offered nothing other than the standard “we’re looking into it” statement.

Fast forward to Sen. Dianne Feinstein’s (D-CA) last-minute accusation against Kavanaugh of an alleged incident from 36 years ago and none other than DNC Chairman Tom Perez, who has remained conspicuously silent regarding the claims against Ellison, jumped into the fray. Perez declared Monday, “This is a lifetime appointment to the highest court in the land and this serious allegation must be investigated thoroughly. The American people deserve answers, not a vote that is rammed through by Republicans. There is too much at stake.”

Meanwhile, Monahan noted the Democrats’ blatant hypocrisy in their calls to believe women. She wrote, “No, they don’t. I’ve been smeared, threatened, isolated from my own party. I provided medical records from 2017, stating on two different Dr. visits, I told them about the abuse and who did it. My therapist released records stating I have been dealing and healing from the abuse.” She added, “Four people, including my supervisor at the time, stated that I came to them after and shared the exact story I shared publicly, I shared multiple text between me and Keith, where I discuss the abuse with him and much more. As I said before, I knew I wouldn’t be believed.”

Monahan has company. When Sen. **** Durbin (D-IL) pontificated that “we must respect and listen to survivors of sexual assault,” Juanita Broaddrick replied, “Well, ****, do I have a story for you. Once upon a time Bill Clinton raped me.”

It would appear that the “party for women” only listens to women when it helps to further its own political agenda.

Round a bout town / Roundabouts
3 hours ago

Open Question, about automobile service sources, to the forum
7 hours ago