The theme of this Christmas is patriotism at 1600 Pennsylvania Avenue.

The halls of the White House are incorporating red and blue into the traditional holiday green, adding a timeline of American design, innovation and architecture and studding a Christmas tree with the American flag. 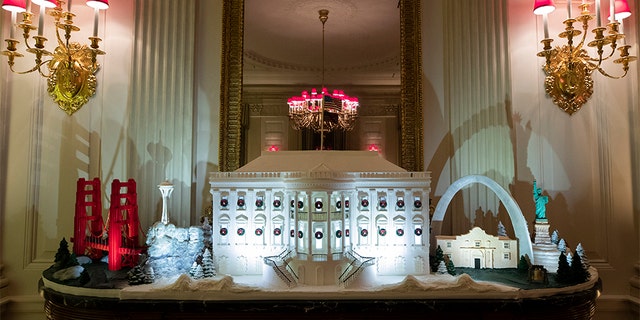 The traditional gingerbread White House is sharing its stage with American landmarks including the Statue of Liberty and Golden Gate Bridge.

The gingerbread White House, built from 200 pounds of gingerbread and slathered in 25 pounds of royal icing and 35 pounds of chocolate, showcases the South Portico, including a staircase made using angel hair, fettuccine and spaghetti.

The popular display also features models of some of the nation’s most famous landmarks, including Mount Rushmore, St. Louis’ Gateway Arch, the Alamo, the Liberty Bell and the Statue of Liberty, along with the Golden Gate Bridge and the Space Needle.

The East Colonnade of the White House is lined with double rows of see-through panels etched with more than 60 examples of American design, innovation and architecture, ranging from the Woolworth Building in New York City to the Space Needle in Seattle.

A tree dedicated to Gold Star families that lost an immediate relative during military service stands at the beginning of the hallway while a tree decorated with the Trump family ornament — an American flag this year — glistens at the end of the colonnade. 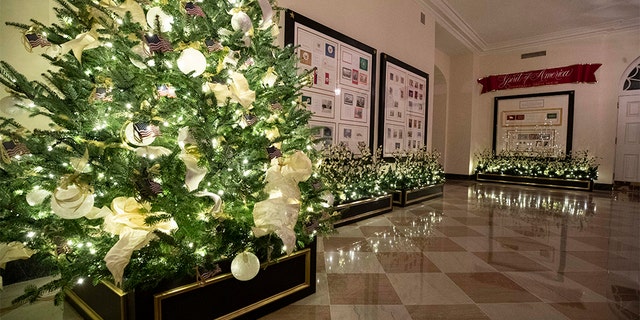 The American flag decorates a tree during the 2019 Christmas preview at the White House, Monday, Dec. 2, 2019, in Washington. (AP Photo/Alex Brandon)

East Room decorations are inspired by the U.S. flag and feature gilded eagle Christmas tree toppers, mirrored stars and red and blue ribbons. In the State Dining Room, at the opposite end of the hallway, the decor continues to showcase American design.

The Blue Room is again commanded by a towering tree, an 18 ½-foot Douglas fir from a Pennsylvania farm, decorated with flowers representing every state and territory.

The Red Room is decorated with games, including trees made of White House playing cards bearing the president and first lady’s signatures. 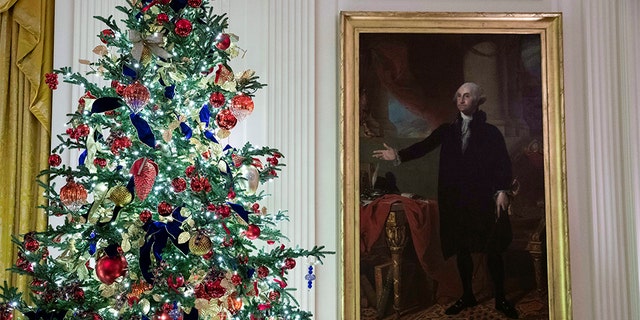 A decorated tree stands next to the portrait of President George Washington in the East Room during the 2019 Christmas preview at the White House, Monday, Dec. 2, 2019, in Washington. (AP Photo/Alex Brandon)

More than 225 volunteers flew in from around the country to help decorate the White House during Thanksgiving weekend.

Decorations in the public areas of the White House include 58 Christmas trees, more than 2,500 strands of light, more than 800 feet of garland and more than 15,000 bows. 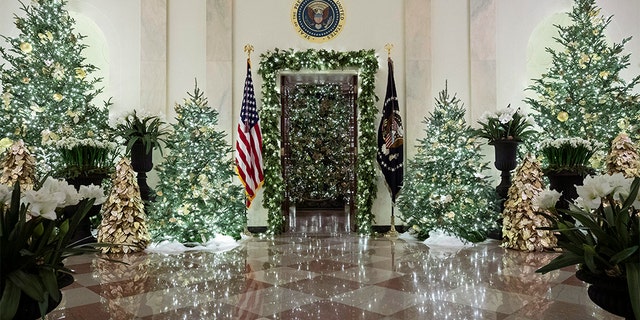 The official White House Christmas tree is decorated in the Blue Room seen through the Cross Hall, during the 2019 Christmas preview at the White House, Monday, Dec. 2, 2019, in Washington. (AP Photo/Alex Brandon)

“It is with great joy that our family welcomes you to the White House this holiday season as we celebrate the Spirit of America,” President Trump, the first lady and their son, Barron, said in the signed introduction to a souvenir book visitors will receive as a holiday keepsake. “We hope you enjoy our tribute to the traditions, customs and history that make our nation great.”

A great President makes the country great and it's about time.

Of course the communist D'Rat's would rather live like Venezuela
and a heaping helping of Hong Kong.
Merry Christmas anyway, even if the Lib's are trying to outlaw
Christianity.  (An Alinsky demand)
Like Reply (0 Likes)
Take Action

Nice to have real Americans in the WH again.