House Speaker Nancy Pelosi has pulled from the floor a bill to reauthorize FISA after President Trump threatened to veto the measure and Republicans began to distance themselves from it.

"The President said he would veto the bill so all of the Republicans then abandoned their commitment to security and said they were going to vote against the bill," Speaker Pelosi alleged. "This has always been bipartisan."

Speaker Pelosi explains why she decided to pull the FISA bill in a letter to Democrats:
"Clearly, because House Republicans have prioritized politics over our national security, we will no longer have a bipartisan veto-proof majority." 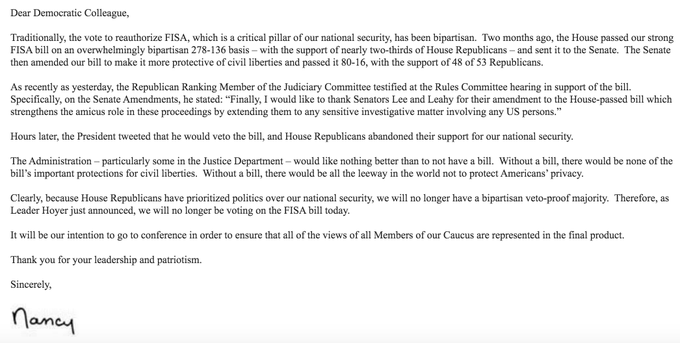 "Clearly, because House Republicans have prioritized politics over our national security, we will no longer have a bipartisan veto-proof majority," she charged.

Republicans had a swift response for the speaker.

She controls the votes!

House Democrats should stop the political games and look in the mirror.

Speaker Pelosi explains why she decided to pull the FISA bill in a letter to Democrats:
"Clearly, because House Republicans have prioritized politics over our national security, we will no longer have a bipartisan veto-proof majority."

The FISA court has been a source of contention between lawmakers, after it was clearly abused by individuals who wanted to unmask members of then-candidate Donald Trump's presidential campaign. After an investigation, it was revealed that in the FBI's monitoring of Trump campaign aide Carter Page, agents used false information to obtain FISA warrants.

Senators like Rand Paul rejected the above FISA legislation as "fake reform." He supports the president's plans to veto. And, as you can see, both men took advantage of their caps lock buttons to emphasize their points.

WARRANTLESS SURVEILLANCE OF AMERICANS IS WRONG!

That's rich considering the Democrats weaponing of the whole FISA process reducing it to a political weapon rather than one of national security.  But then all that never happened and you'll never hear condemnation about it in the main stream media.

Transcripts of Flynn's calls do NOT support the Republican narrative. Unless they let Flynn out for lying to the FBI in order to charge him with treason.

Anybody surprised?
12 hours ago